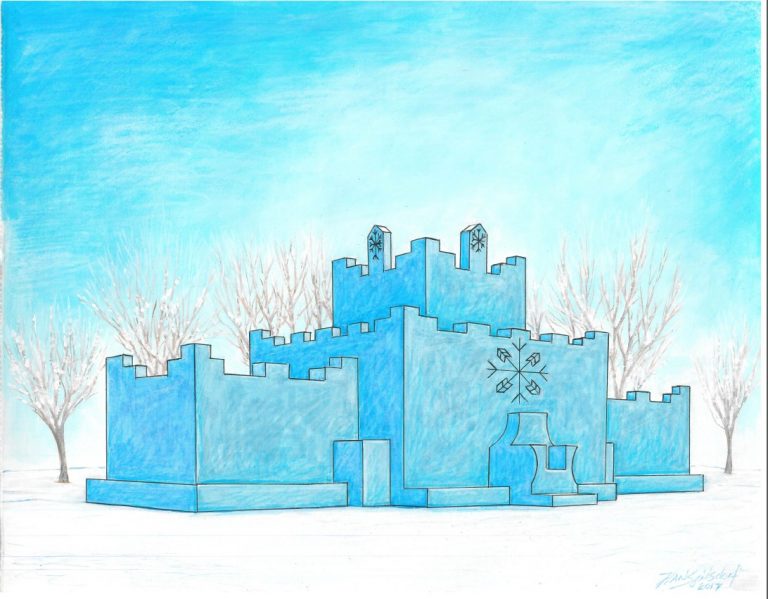 An idea was sparked by Ken & Helen Foltz while visiting the 2017 St. Paul Winter Carnival. St. Paul’s Ice Palace is built from Minnesota ice, but there was concern as to where to get the next batch of thick, clear ice. The minimum requirements were 12″ of solid ice by December 15th. Ken & Helen knew the ice harvesting history of Detroit Lakes and understood that our lake would certainly have enough ice. That’s when they contacted Scott & Tiffiny Walz.

Scott and Tiffiny, along with Ken & Helen, gathered a group of local volunteers to meet with the St. Paul Committee and discuss viability of the project. Everyone was enthusiastic and felt that this community could absolutely get the large order of ice blocks filled. The Ice Harvest DL Steering Committee was formed and began to move forward with the massive project. However, after all of the plans had been made and put into place, the St. Paul Ice Palace funding fell short. When the Ice Harvest DL committee received the news, they were very disappointed. All of the hard work, the research, and the plans were suddenly all for naught. Then, a new spark began to glow. Why not build our own Ice Palace?

After encouragement from local business owners and prospective sponsors, the Ice Harvest DL Committee embraced optimism and altered the plans. With the support of the City of Detroit Lakes, the foundation plans were moved to the DL City Beach. The DL City Park was made available for a Palatial Playground. The Pavilion was made available for a History Exhibit and warming house. New ideas and dreams began to sketch a new, crazy, bigger, better plan!

On the morning of January 11th, 2018, the wind chill was just about -35* below zero. A dedicated group of local volunteers and a professional lake ice cutting company, Wee Kut Ice, began the harvest. For the next three days, they would work in the brutal cold from dawn to sunset. Due to the brutally cold weather, the ice was around 22″ thick. Each block being harvested was about 22″ x 44″ x 25″. About 1,300 blocks were harvested over three days, weighing in at a total of over one million pounds of ice.

The extreme temperature swing between the lake water temperature and the air temperature was causing the ice blocks to fracture internally. The ice was stacked and stored in order to temper to the environment and strengthen before construction could begin.

Construction of the Ice Palace began on January 17th, 2018. When the Palace was completed, work began on smaller ice structures such as couches, benches, and even a bookcase with a lamp; all carved entirely out of lake ice. Other ice blocks were used to create a border fence around what became known as the Palatial Playground. Ice was even used to build giant bonfire pillars!

The Grand Lighting took place on February 7th, 2018 as a kickoff event for Polar Fest.

On February 18th, 2018, the Ice Palace was demolished. The clear, clean lake ice was absorbing the light of the sun every day. There were puddles forming in the streets of Detroit Lakes and the spring thaw wasn’t far behind. As a safety precaution, the Palace had to come down.

The Ice Harvest DL Committee met again the next week and began to ask, “What’s next?”

The rest, as they say, is history!